You only have to read my Beyond Blue review from a couple of months back to know how much of a nature lover I am, so once I learnt about Lost Ember, an animal exploration game that puts you in the paws, wings, and fins of a variety of different wildlife, I was all in!

Mooneye Studios, a small German-based developer, has created a concept of switching between animals on the fly in an incredibly successful and delightful way, whilst also including a compelling story-line that drives the experience forward.

The story of Lost Ember takes place in the fallen world of an ancient civilisation known as the Yanrana. You play as a wolf that is approached at the start of the game by a wondering lost spirit, in the form of a pink orb of light, who believes that you are a Lost Ember – a reincarnated member of the Yanrana tribe who has been denied entry to the City of Light after your death because you weren’t righteous enough in life.

Neither the wolf nor the spirit can recall their past lives, and the spirit promises to help you unlock your memories if you join them in their quest in being able to ascend into the afterlife. These memories are unlocked by locating plumes of red smoke which triggers statuesque still-images that detail scenes from your past life. You’ll witness significant events that give you an insight into the culture of the Yanrana civilisation, while also detailing the events that led to your death.

It’s a really thought-provoking and engrossing narrative that explores the themes around rebellion and forgiveness and is told in such a compelling way that it’s a real highlight of the game.

The only minor annoyance with the story is that the voice acting is pretty poor and thus detracts from the narrative. This is especially apparent with the voice for the spirit, which I found didn’t quite match what I would have expected from a person part of an ancient civilisation. I might be being a tad harsh, but as I found it so jarring, I ended up putting the subtitles on and muting the sound.

The duo’s journey takes you through a variety of lush environments including vast grasslands, wooded jungles, barren deserts and ancient ruined cities. It’s a very pretty game and I especially liked the architecture of the ruined cities, with their giant statues and broken monuments and buildings, which really felt like you were exploring a lost civilisation that had been untouched for over a millennium where nature had fully taken control.

The breath and openness of the game does have some shortfalls as, unfortunately, the landscapes can often have muddy textures that look a tad rough around the edges, there are readily slight freezes when environments are loading, and you’ll often see scenery pop-in too.

What makes traversing this beautiful world so compelling, and is the true appeal of Lost Ember, is the fact you do so through the eyes of the wildlife inhabiting it. As the initial wolf that you start the game as you will come across various obstacles in your path that prevents you from continuing your journey. This may be in the form of rock falls, tunnels, cliff edges or rivers to traverse.

The real magic of your character comes to life where you can seamlessly switch your essence into that of a different animal species.

This allows you to combat the obstacle with having a new unique skill, such as when you are an adorable wombat you can roll through the tunnels or being able to dig underneath or break down walls as a hard-shelled armadillo. Some of the actions have seemingly no gameplay merits, they are instead nice little behaviour quirks such as having a lie-down or eating some berries.

A personal favourite fun quirk of mine is taking on the form of a fish and using its jump ability to leave the water and see how far I can flip-flop along for until it becomes stranded. Don’t worry though as you won’t be trapped for long as a single press of the A button will switch you back to your original wolf form.

The move sets for each species do change slightly, where for most land animals pressing the ZR button will make you sprint, but for bird species, it will instead take you higher into the air. The game feels immensely satisfying being able to soar high into the sky and take in the full scenery of the world and immensely useful in locating all the collectables the game has to offer, but I will come to that later.

In all, there are a dozen or so animals that you can take possession of and I won’t spoil some of the later ones which are pretty special. My only slight complaint is that a lot of the different species are not introduced until the latter half of the game and so the first portion gets quite repetitive between the species you control.

Lost Ember is described as an animal exploration game and it most certainly plays out as one – I would also describe it as a tranquil animal walking simulator. There are no enemies or even puzzles within the game. Each obstacle you come across will literally have the animal you need to inhabit right next to it. There a few ‘action’ sequences such as having to fly through a fiery temple, and some Quick Time Events will appear that you have to press to avoid obstacles, but these are not challenging at all.

You can, however, die by falling too far but the game will quickly respawn you, not always in a favourable place though, and sometimes you can end up endlessly slipping from a cliff edge requiring you to reset from a recent checkpoint. This technical hiccup isn’t the only one I came across, as I would frequently get stuck on an object or trapped in part of an environment which I couldn’t get out of.

One such glitch was in a ruined building which I decided to explore as a duck, but unfortunately, once I landed I was stranded – whilst as a duck you can of course fly, but you only really jump and glide, you can’t ascend. Even the windows to the building acted as a barrier, I was unable to jump through and escape. These little things, while annoying, thankfully didn’t impede my overall enjoyment of the game.

As mentioned previously, there are a wealth of collectables to discover for those that wish to explore every little nook and cranny of the world. These include a variety of different mushroom species, artefacts from the ancient civilisation and a total of six legendary species.

Across my 5-6 hour playtime, I was fortunate enough to locate all the legendary species which are pretty much identical to its counterparts only these ones glow white. It is always a shame that the Nintendo Switch doesn’t have an achievement system as it would give locating these collectables much more impetus.

Final Conclusion:
Lost Ember successfully creates a mechanic of switching between animals and exploring a gorgeous world in a seamless and unique manner. It’s a real highlight of the game which is only complemented further by having such an engrossing and strong narrative. It is a shame that some technical hiccups impair the games’ overall quality but none the less, it is a very worthy title for nature lovers or those looking for a relaxing experience to add to their Nintendo Switch library. 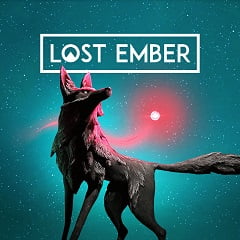