Back in July we finally got out hands on Train Sim World on the PS4. At the time, I did a full in-depth review that explained everything from what you can do to how much content you get within the base game. Fast forward two months and Dovetail Games has released their first piece of paid DLC (with another one due shortly I presume, as it’s out now on PC).

The West Somerset Railway DLC also comes with a hefty price tag of £19.99 here in the UK – for that amount of money I’d expect a lot of extra content. Let’s take a look and see if the extra content is worth it, both content-wise and financially.

I love jumping out of the train and looking at what’s around me.

I know what a lot of people are going to say, so I’m going to give you an answer to an unasked question first. No, you aren’t ‘required’ to buy this DLC, nobody is holding you hostage and demanding you buy it or you never see your family again, and not owning the content won’t make your version of the game any worse than someone else’s. Now, why do I think you’ll ask that? I’m a massive fan of the PC version of Train Simulator, and the one thing you see constantly over on the Steam forums is “Why is there so much DLC”, “I can’t afford to buy the DLC”, “The DLC should be free”, etc… To put it in context, there is literally over £5,000 (five thousand pounds) of DLC content on the PC version of the original game.

Is anyone going to own all of them? No. The average person may own one or two packs, I own about 10. People purchase the extra routes and trains as they excite the buyer and it’s a route they are interested in. The same thing goes with the DLCs which are going to release for Train Sim World I imagine, especially if they are all launching at the same price point. So, please take that into consideration when you see various DLC packs pop up on the store-front – you’re not forced into buying these and having 100% trophies isn’t a matter of life or death – it’s the means to track progress and show what you’ve achieved.

Sorry to start the review off with a serious tone, but it had to be put out there before I begin. So, let’s see what you get for £19.99…

The West Somerset Railway DLC comes with two new locomotives, the short and stubby Class 09 GRN, which is used to move other locomotives and carriages around the track, and the Class 47 GRN, which is your standard locomotive. Both of them are perfectly modelled off their real-life counterparts, just like in the base game, with all of the controls, imperfections, features, and liveries being a spitting image of the original. We are also given two new tutorials, both with trophies, which introduces you to the new engines and gives you a brief overview of what they can do.

As well as the two locomotives, which you can use in free play mode and ‘Services’ mode (16 different objective-based events), you also have six new scenarios which range from 30 to 75 minutes each. In total, the scenarios themselves add up to at least 5.25 hours – I say ‘at least’ because I found out last time that the in-game ‘estimated time’ was very accurate and I did a ’30 minute’ one last night and it took me 48 because I screwed up! So, in terms of the question “do you get enough content for your money”, I would say yeah. Sure, it’s £19.99 but with at least five hours in just the scenarios, a new railway, more collectables, more trophies, new ‘Services’ and a few new locomotives – that’s not bad.

The scenarios are even longer than the base games ones.

The story this time?
West Somerset Railway‘s route takes us from Minehead all the way to Norton Fitzwarren – a 20-mile journey that would take approx 1 hour (based on real-life train times). All six scenarios revolve around tourists and moving around various passenger carriages. It seems we are re-enacting a whole day worth of events through a few which are scattered through the timeline.
• We begin with setting up the Class 47 by moving it from one station all the way to another (30 mins).
• Then, the Class 09 is called in to help with demand and run some extra services (75 mins).
• With the Class 09, we need to retrieve some empty passenger carriages and bring them back to Minehead (45 mins).
• Next, we have to do the same thing but with a Class 47 involved (45 mins).
• After having a day of sun and sand, we must ferry the tourists home using the Class 47 (75 mins).
• Finally, we need to return to the depot at the end of the day in order to lock up for the night with the Class 09 (45 mins).

I’ve played through three of the scenarios, completed the tutorials, played around in free play, and done a few ‘Services’ so far – I’m really enjoying this DLC. I’m just eagerly awaiting the developers to bring a Manchester to London pack to Train Sim World. So far, all of the routes have been down south in the UK. If they can get the license off Virgin to do that route then I’ll be very happy.

I just wanted to put this comparison in here for you to see how much work the developers put into these tracks and how much detail is there, even if you don’t notice it. The image on the left is in-game as I was driving from one point to another and I passed some caravans on the left-hand side with a few cars in the middle of them. The image on the right is google maps at approximately the same spot – as you can see, on the left of the track is a caravan park with a car park down the middle of them! Now, I’m not saying the entire line is modelled 1:1 off real life, as I didn’t check it all, but that was a random point that I passed that I decided to take a screenshot of and look it up.

This is why I love their original Train Simulator game on PC as well, it has a lot of routes that are very authentic as well as replicas of all of the major train stations throughout the UK. Anyone can put together a quick train game and pretend it’s authentic just because they drew out the same shape the track is in real life, not everyone will put in this much care to also decorate the outside of the track with real-life objects.

Personal Opinion:
At the current price point, £19.99, I would say that train enthusiasts, those who want about 5-10 hours more content, and those who like this particular route are going to be the main target audience. As I stated earlier, if Train Sim World starts to churn out DLCs as fast as they do in the original PC game, I don’t really expect everyone to purchase every piece which appears on the store. However, if you look at the DLC in terms of value for money, and take away the fact I love these types of games and can literally sink hours into them just messing around, it is a little expensive when you can pick up a full 20-40 hour game for less than one piece of DLC.

So, it’s all up to you as to if you should pick this up or not. As stated above, the two new locomotives look incredibly authentic and operate differently to the ones in the base game, the new track is just over an hour-long if you go from the first stop to the last one and follow the speed limits, there are a load of new scenarios and ‘Services’ to participate in, and a bunch of new collectables to find. As you’re getting around 1/3 of the original content in the base game, I would have prefered a price point of around £11.99 – £14.99, but I’m sure enthusiasts will spend countless hours purely in the free play mode, never mind the pre-designed missions.

One thing I would like to ask for if the developers are reading this – can we possibly have the option to acquire the ‘Deluxe’ content separately? A pet hate of mine is when a game has a standard and deluxe version yet owners of the standard can’t obtain the deluxe content – in this case, it was a new locomotive from what I’ve read. I know it would be another DLC on the store, but I wouldn’t mind getting hold of a new train to mess around in.

Also, on a side note, in terms of technical issues – the developers seem to have resolved a lot of the issues I had with the base game such as extreme pop in, the loss of using the right stick and a few minor bugs. There is still some pop-in, as you’re travelling at up to 60mph in a vast open plain, but it’s not as bad as it once was.

Final Conclusion:
Train Sim World: West Somerset Railway – DLC is a great addition to the greatest train simulation game on consoles. Regular gamers may think the price tag is a little high but enthusiasts will know just how many hours they can get out of a new railway line, two new locomotives, six scenarios, 16 mission-based ‘Services’ and the free play mode. You’ll easily get over five hours of extra content if you only complete the scenarios, if you factor in everything else then you’re looking at 10+ hours easily. The amount of care and attention put into both the machinery and the actual route is simply breathtaking!

The developers are the elite in simulation games, this DLC pack didn’t alter my opinion of that at all. Bring on the next one!

PSN (UK)
Roger & James in They Came From Below [We Happy Few DLC] (PS4) Review
Share this article! 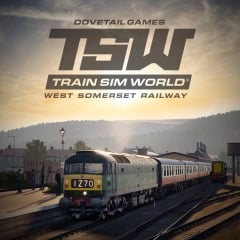