Dirt 5 launched on ‘last-gen’ consoles on the 6th November, followed swiftly by an updated version on both the Xbox Series S|X and PS5 at the launch of the new generation. As we were kindly provided with the game pre-launch, our initial review (HERE) was based upon the PS4 Pro version of the game on update 1.02. Since then I’ve had the chance to experience the game on the PlayStation 5 and see how the game performs on one of the most powerful consoles in the world.

This ‘review’ isn’t really a ‘review’. If you want to know the ins and outs of the game, the features available within the various modes, and our impressions of the game as a whole, check out our original review HERE – this is more like an additional update to the original review where I’ll be talking about what the next-gen edition brings to the table and what I think about the revolutionary experience (thanks to the DualSense controller).

I was initially impressed with Dirt 5 on the PS4 Pro, presenting it with a well-deserved 8/10 in my original review, but I did have a few performance issues which affected my overall enjoyment. Since launch, Codemasters has released a few patches which thankfully resolved the biggest issue I had, career data vanishing upon installing version 1.03, and they also fixed the constant screen-tearing within the 60fps framerate mode. However, the fix was to simply enable V-Sync which then created more issues in the guise of frame drops and slow down when the screen was busy.

I’ve not played the game on the PS4 Pro for a few weeks now as I grabbed the final trophy (driving 1,000 miles) on my PS5 via Backwards Compatibility, meaning I had a rock-solid 60fps in the performance mode with no screen tearing. This experience is great as the last thing you want in a high-speed racing game is a terrible framerate and/or slowdown which can affect your reactions.

But, I didn’t buy the PlayStation 5 to play games in BC mode, not if they have a native PS5 edition which takes advantage of the new hardware and features. Now, before I get into what the new generation offers, this version of the game has had a number of updates on both the Xbox and PlayStation consoles – each one tweaking visuals, performance, and quality. The main reason for this is because the Xbox version launched with a very obvious lack of quality over the PS5 version, having lower quality vehicles, textures, resolution, and overall visuals. Today, the Xbox version is ‘almost’ the same quality as the PS5 version (Digital Foundry explains it best, HERE), but the PS5 is still, in my opinion, the best place to play Dirt 5 – both visually and with the controller.

Visual settings
Dirt 5 comes with three settings which allows you to choose how you wish to play the game. These are:

Quality Mode: On the PS5 you can expect a resolution of 1440p-2160p (depending on how busy the race is) and it’s almost a locked 60fps. At launch, I thought this mode was great as the visual quality is boosted, everything looks much more detailed, and it ran at a great framerate. However, since the developers have been tweaking and fixing the issues over on the Xbox version, I’ve felt this mode slip a little and more frame drops have appeared. It’s nothing major and you’ll still enjoy the racing, but it just isn’t as fluid as I recall it being a few weeks ago.

Resolution Mode: On the PS5 this is basically 2160p, for the vast majority of the time, and a locked 60fps (again, most of the time). The difference between this and the previous mode is that it cuts back on a few visual details such as shadow quality and ambient occlusion, allowing it to maintain a more stable framerate and higher resolution throughout. This particular mode doesn’t appear to have changed in regards to the performance since they’ve been issuing patches but the latest update has messed with the brightness and contrast a little, making the overall visuals a bit worse than they were a few weeks ago.

Framerate Mode: On the PS5 you can play Dirt 5 at 120fps with a resolution of around 900p-1440p (according to Digital Foundry). For me, I was playing it at 1080p as my TV only supports 120fps in 1080p. This was the mode which caused many complaints over on the Xbox as the game was night and day when compared to the PS5. The Xbox version literally looked like an early PS3 game with its blocky textures, low detail, missing geometry, and overall fugly appearance. The latest update has brought that version in line with the PS5 edition (which is basically ‘Resolution Mode’ quality but scaled down). Again, according to Digital Foundry, the PS5 version doesn’t hit 120fps constantly, it’s usually 90-120, but I doubt you’ll feel the drops as it’s a very high frame rate.

So, you have three choices to pick from to allow you to play how you wish – higher quality whilst sacrificing the resolution, higher resolution whilst sacrificing the quality, or higher framerates by sacrificing both quality and resolution. I personally just played in Resolution Mode as it looked and performed great – it was on par with the PS4 Pro in 4k mode, only a higher resolution and 60fps instead of 30. I tried the 120fps mode but I really don’t see the appeal or fuss over the higher framerate seeing as you have to bring the resolution right down to 1080p – this is the same situation I had in Borderlands 3 as well.

Revolutionary experience
Dirt 5 is literally the same game on the PS4 and PS5 – you get a free upgrade from last-gen to this-gen but why would you even bother playing it all over again if it’s identical? One word, DualSense. The first game I played on my PS5 was Astrobot’s Playroom, the free pack-in title with the console that basically shows off all the features of the new controller. I thought the use of the new adaptive triggers and haptic feedback was great, fully immersing me within the world and offering an experience I’ve not felt before – then I played Dirt 5…

It’s hard to put into words how it feels to play Dirt 5 on the PS5 with the DS controller – it’s like playing with an actual ‘force feedback’ controller (not rumble, which was evolved from that concept). The triggers (L2 and R2) can have their tension adjusted by the game based upon the situation you’re in, making it harder to pull, providing a satisfying ‘click’, or even locking up completely if the game doesn’t want you to press it at that time. Dirt 5 basically puts you in the seat of the car by providing force to your acceleration and braking fingers as you go over certain terrain types – it’s unreal.

As you’re holding down R2, if you divert off the road and venture off-road, the trigger will begin to fight back and gently pulsate under your finger, making it feel like you’re literally driving over rubble and the stones beneath you are causing your foot to jerk a little. Similarly, if you try to apply your breaks when going at full speed, you feel the tension as you pull on the trigger/press the pedal as you would in real life. Some people have concerns about this feature as they don’t like the sound of the controller ‘fighting back’, but it’s not intrusive, it’s gentle enough to not annoy you yet impactful enough to make a difference.

Basically, even ‘if’ the Xbox version was better than the PS5 version in regards to the visuals, resolution, and framerate, the best place to play Dirt 5 would still be on the PlayStation simply due to the innovative and immersive new DualSense controller. What I find funny is that the devs have even said they want to improve the feedback as they aren’t 100% happy with it – I’d love to see that as I thought it was perfect as it is!

Other additions/improvements
Dirt 5 on the PS5 also utilises the ‘cards’ feature, allowing you to jump straight into multiplayer matches or continue from where you were directly from the dashboard. This isn’t as fast as the ‘Quick Resume’ feature on the Xbox, but it makes booting into the required mode much faster and seamless. Also, all versions of the game were recently updated with a free snowy update, adding blizzards and snow to the game’s dynamic weather. This update also now lets you listen to the podcasts when you want and not just whilst in the stage select screen. Finally, as mentioned above, the 10k miles trophy has been reduced to only 1k miles – this makes completion much easier but you’ll still find yourself grinding for many hours after completing every race in order to achieve this trophy.

Final opinion
So, should you pick up Dirt 5 on the PS5 – yes. If you picked it up on the PS4 then you’re entitled to a free copy of the game on the new console, either digitally or physically. But, other than the boosted resolution and performance, and the brilliant controller usage, it’s the same game. As such, if you’ve just spent about 40+ hours platinuming the PS4 edition, maybe give it a few weeks before you jump back into the enhanced edition as you’ll just feel burned out if you try and run through the entire game straight after you just ran through the entire game.

There is no ‘score’ for this version of the game as it’s the same as the PS4 review (HERE). However, I just wanted to talk about how the PS5 version of Dirt 5 plays and what my thoughts were of the new version. 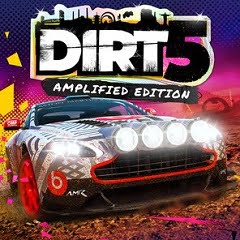