Raining Coins is a port of a mobile phone game of the same name from developer Crazysoft, the one-man development studio behind Zeus Quest: Remastered. Those looking for an easy platinum may look away now as Raining Coins is the dark souls of mechanically simple games – with it’s challenging gameplay and almost impossible trophy requirements, this game will keep you busy for hours if you’re looking to obtain the platinum.

Can you help the protagonist, a very upset little girl, raise enough money to buy herself a new trampoline? Or, is she doomed to stare into the shop window forevermore?

Look how happy she is! Can you make her this happy?

The story is simple, our protagonist is a young girl who sees a new toy in the window of her local shop and instantly wants to buy it. Realising she has no money, she begins to imagine that the answer to her immediate lack of coinage would be if the skies above began to rain money! Funnily enough, the clouds begin to drop coins at an alarming rate, so the girl rushes to get her piggy bank and proceeds to try and catch all of the money in the tiny slot on the top of the device.

I know what you’re thinking – why can’t she just pick up the coins off the floor and pop them into her piggy bank without having to brave the onslaught of raining coins, which at that velocity could seriously injure her if they were to make contact with her body? The answer to that is because it would be too easy and wouldn’t make for a good game – as such, if you miss a coin and it touches the ground, then the magical falling coin will evaporate and leave this dimension altogether.

So yeah, the object is to catch the coins as they fall as you play through 80 levels which get pretty hard pretty fast! Our young lady will become obsessed with four items, one every 20 levels, items such as the aforementioned trampoline, a pogo stick, and more – she is obsessed with things she can go up and down on! This isn’t an easy game, but it isn’t incredibly hard, it just throws in a few mechanics here and there to catch you off guard and mess with you. With that being said, put on your wellies and grab your umbrella as we splash about and catch some Raining Coins…

The coins come down so fast sometimes – I can’t imagine how people played this with motion controls on the phone!

Mechanically, you can’t really get any simpler than Raining Coins, you move left or right and catch coins in your piggy bank – that’s it. Depending on how many coins you collect, you are rewarded with zero, one, two, or three stars upon completion – yes, this was once a mobile game so it has the dreaded “you must have X amount of stars before you can progress to the next set of levels” mechanic, a mechanic I personally don’t like. However, I’ve not run into a situation where I’ve hit a wall yet.

The game sounds easy, doesn’t it? I went into this thinking it was going to be an easy platinum – oh boy, was I wrong! The first ten or so levels are easy, the clouds fire a lightning bolt and that’s where the coins will drop – simply stand, get coins, profit! Later on, the clouds will move left to right, so you must constantly move in order to get them – still simple. Then the clouds will spin and the coins will shoot out at angles, angry bird-style, which is more tricky but still doable. But then we are introduced to the hazards…

The hazards get more advanced and more plentiful as you progress.

…The hazards are a pain in the butt! First, we have a bird that will swoop in and steal coins from the cloud – they will then drop the coin at random, which could be on the opposite side of the screen to the cloud which is spewing coins which means you have to make a pixel-perfect dash for it. Then we have the cannons which are like the sideways clouds only they shoot the coins out much further and with more velocity. We also get my most hated device, the floating J’s! Basically, they are a J-like line that is just casually floating in the sky and any coin which drops down it will roll and thrust itself up at a strange angle, making it’s landing destination really hard to predict.

There are other hazards introduced as well, but all of the above make it really hard to obtain 100% of coins on each level, even if you use the perks. Yup, the game has perks which were most likely Microtransactions on the mobile devices; however, they are free and easily re-obtainable in the PS4 version. You have two perks, one of them makes your piggy bank and its slot on the top bigger so it’s a little easier to catch the coins, and the second perk gives you an aiming reticule of where the coins are going to land. Both sound great on paper, but in practice I found the aiming reticule to be a pain! It works as intended, don’t get me wrong, but with 10-20 coins shooting out at high speed, you see so many lines of trajectory that you are unable to distinguish which is related to which coins.

You have three uses of each perk and upon using one, when you play the next level, a bird will fly by with one of the abilities for you to catch as it drops it – upon catching it, the perk is refilled by one.

That about sums up Raining Coins, catch the coins as they fall from the sky whilst catering to the various hazards and obstacles in order to help the little girl purchase an item from a shop then move on to her next infatuation. It’s a simple game with simple controls, yet it’s a challenging and unforgiving little game that will have you rage-quit many times.

From a visual stance, the game looks very child-friendly, and it probably is, with its cheap price and adorable graphics with Southpark-like movements – the game was really pleasant to play with its bright colours and cute art style. Similarly, the audio and the music fit each scene perfectly, from the crying of the little girl to the music in the most intense levels – everything is put together to really set the mood for the game.

Finally, the trophies. A lot of the trophies revolve around progressing through the story, but some are based on obtaining the highest possible score on all levels in each ‘world’ (basically, each shop/item). This seems like an impossible trophy as some levels are way too hard to 100% – unless someone can prove me wrong and obtain all of the coins and get the platinum on PSNProfiles? Not surprisingly though, those four trophies are the ones which nobody has got yet.

Final Conclusion:
Raining Coins is another fun go-to game for me whilst I wait for something to download or if I only have a few minutes to play on something before I do something else. Due to its origins as a mobile game, I find playing games like this in short bursts the best way to play them – although why it isn’t on the Vita is questionable as it falls into my “should be on the vita” list. The cute nature of the game will appeal to younger audiences but the challenge will also appeal to older gamers as well – don’t be put off by the way it looks, this game is hard and yet rewarding as you get to buy a gift for a small, crying girl. I would say give it a shot if you want a challenge, see if you can become the first person in the world to obtain the platinum. 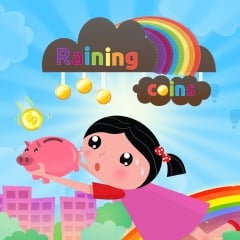