Do you like speed? Check. Do you like adventure? Check. Do you like spending half of a game getting used to the controls and then starting to enjoy the game more? Erm… I’ll get back to you on that one! Defunct, developed by Freshly Squeezed and published by Soedesco, has been available on PC for a while and has received ‘mostly positive’ reviews on Steam. Here in Europe, we received the game on PS4 almost a month after the American PS4 version due to an unforeseen delay!

I had been looking forward to playing Defunct ever since I saw it, as what’s not to like? Speed, action, a unicycle robot who looks like Wall-E v 2.0! However, not everything is smooth sailing – come for a ride with me as I see if this game is Defunct in more ways than one…

You fall to Earth and must trek through various environments to get back home!

The story is one of the weaker parts of Defunct as it’s generic and very shallow. Our main protagonist is a broken robot who lives on a cargo ship which travels to various locations around the planet. One day, you were playing around in the cargo hold performing simple tutorial-like exercises as you zoom around and jump all over the place whilst performing tricks (this is the tutorial of the game) until suddenly, you accidentally get sucked into a chute and end up falling from the ship! You land on the post-human Earth whose main residents are now robots similar to yourself, only they aren’t broken.

You must set out over 11 levels (10 if you don’t include the starting level on the ship) in order to chase down and return to your home before your ship sails, so to speak. The game has no combat, so along the way, you will encounter puzzles, confusing landscapes and obstacles you must overcome if you wish to ever see your home again. Your main crutch is the fact that you are broken, you can only move at slow speeds due to an engine failure. as such, you must use your ‘Gravitize engine’ to pull you down hills and slopes so you can gain momentum to traverse lakes, cliffs and even ride upside down with your magnetised wheels.

If you grab these activated wires you can use them as a zip-line and traverse great distances within seconds.

I will begin my review with the one aspect which almost had me giving up and asking someone else to play this for me – the controls. On paper, the controls seem strange and, in practice, they are hard to get to grips with yet once I got used to them I really started to enjoy the game and couldn’t put it down. It’s one of those things where you really have to give it a chance if you want to get the most out of it. The main mechanic you will be using is gravity due to your broken engines, as such, you can move forward and up hills using the circle button but you move really slow and this isn’t how you are meant to move about.

Everyone knows that gravity works best for you when going downhill – you wouldn’t like riding a bike uphill, but it will be a breeze going down. It’s the same situation here – once on a slope going down you hold R2 and your Gravitize Engine will kick in, pulling you down to earth as you gain more and more momentum. Our little robot has a handy light on him which switches from Green (Gravity will make you faster) to red (Pressing R2 will cause you to halt) to allow you to use this mechanism efficiently. Once you have mastered this, you can go really, really fast as you almost glide through the open areas. You can also pick up boost canisters and mini-boost points which helps keep/build up your momentum when on flat ground.

Gravity isn’t your only ally, you also have access to a kind of magnetic wheel motion. By holding down triangle, you can attach yourself to metallic walls and panels with allows you to easily shoot up walls and even ride upside down in various locations in order to progress or find secrets. The only other thing which I found a little confusing was you applied your brake by pulling down on the left thumbstick. I would have liked this to be the L2 button personally, but that’s just my own preference. Once you get used to the controls the game becomes a lot more enjoyable and easier to traverse.

The planet you land on is Earth but long after the humans inhabited it – a bit like Wall-E.

As you complete each level, you will unlock a time trial mode for each of the 11 stages. Defunct encourages you to go back and try and earn the bronze, silver, gold or platinum trophy on each level – not only will this allow you to get used to the controls quicker and easier but it will also get you used to the levels as you try and beat the world records which have been placed on each level by other users. Also, five new Time-trial only levels become playable as you progress throughout Defunct. These seem to be much harder than the main levels but once you have played them a few times you begin to learn the layout and the best way to overcome them.

Throughout each level you will find numerous collectables which unlock new character skins and even new tricks – tricks can be performed by pressing a combination of the Square button and directions whilst in the air. These don’t offer any gameplay advantages such as health or boost capabilities, but they do give your character a new coat of paint, literally. If you are aiming for the platinum then you must find all of the hidden collectables and they aren’t all out in the open – I have played through Defunct twice so far and I still haven’t found all of them!

Towards the end of the game, various puzzles appear and are quite fun to complete. I just wished there were more of them!

The level design is a bit of a mixed bag. At the beginning, on the ship, I really enjoyed myself with a Tony Hawk-esque setup for you to learn the tricks and general controls. However, once you are dropped onto the planet, don’t be surprised if you get a little lost. A few of the levels had me wondering where I was for quite a while until I realised I was going the wrong way! Towards the end of the game, the levels become more thought out and a lot more interesting – there is a level where you must open a passage in the ground by lighting up four locks. These are lit by following the cable coming from the light and activating four towers by using your speed and jumping skills. I really enjoyed these final levels and I wished Defunct had more levels with puzzles like this for us to play through.

This brings me to another point which could be seen as a negative by some people – the length ofDefunct. It took me just under 90 minutes to complete the game this morning, from beginning to end. Personally, I was just getting used to the controls and really beginning to enjoy myself when the ending screen came up. I have only unlocked 1/4 of the trophies so I still have a lot to do in the game as I go off looking for the secrets and attempt to take on the time trials – but if you aren’t into things like that and just want to play it once and that’s it, then you have to take the time into consideration.

To the left, you can see the cargo ship, your home, as you chase after it before it leaves without you!

Graphically, Defunct looks great. It’s not the most visually stunning game out there but it is nice and colourful and very pleasing to the eye. True, the texture quality and assets leave a lot to be desired as they look like a remastered PS3 title, but overall you don’t notice things like that while you are speeding around like a headless chicken! The game has various biomes which offer different environments and assets. This changes the visuals and helps keep the game fresh and different throughout the various areas.

The music is fitting and matches the gameplay you are currently playing and the sound effects work as intended. There are no voices and no interactions between anyone/thing – so all the cutscenes and videos are simply in-game with music and sound effects. It does the job great, I couldn’t hum you the soundtrack but I enjoyed it whilst I was playing.

Final Conclusion:
Defunct is a fun little indie platformer. If you persevere with the game and become accustomed to the controls then you really start to enjoy yourself a lot more. Defunct itself isn’t very long, so the worth of the amount of content you get is totally up to you, but I feel that with the time trials, collectibles and the replay factor of wanting to replay once you are used to the controls; you are getting a decent amount of content for the price. If you’re looking for a nice little game to replace the speed element which the latest Sonic games lost, I believe you have found what you are looking for.

PSN (UK)
Along Together (PSVR) Review 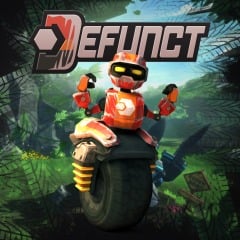