I grew up with the Power Rangers, I would watch it religiously every time it was on TV. However, my knowledge of the show only stems around the Mighty Morphin Power Rangers and the first movie – I’ve not watched any of the later shows or the new rebooted movie yet. So, once I heard they were bringing out a new game that includes characters from the last 26 years, I had to try it out! Seeing as the last few Power Ranger games haven’t been very good, I was hoping Power Rangers: Battle for the Grid would remove the stigma that a game based on the series was destined to be bad…

Unfortunately, when the mobile phone version of a game has more content than the console version, that’s not usually a great sign! However, it’s not all doom and gloom, there are some really cool things to talk about so let’s get started

Power Rangers: Battle for the Grid is a fighting game, not a 1v1 fighting game, it’s a 3v3 ONLY tag-team game. That’s right, there is no option to simply play 1v1 against a friend or the CPU – its three characters each or nothing. It also only gives you a single round per match, with the victor being the one who reduces the health of all three of their opponents’ characters – which essentially means you have three lives each (kind of). Actually, whilst I’m talking about the options, there’s a lack of settings such as difficulty in single player (it’s pre-set and progressively gets really hard) and other things like how long the timer is and the aforementioned gameplay mode.

In regards to actually playing the game, you have a few options. You can opt to play in a ranked or casual online game (which requires an online subscription on the Switch), play the Arcade mode on your own, play Versus against another person locally or the CPU, or train against a training CPU. Sounds like your standard options right… Well, I’ve tried them all out and I’ll start off with the most disappointing mode in the game…

**Update: Post-Launch, the developer has added three new characters and a Story Mode as a free update. Click HERE to read my review on that aspect.**

This one-liner is about as much story as you get!

Arcade mode
The main single-player mode is the Arcade, this consists of eight matches against multiple enemies (some have three enemies and some two with double health bars). There’s no story, no exposition, no narrative or dialogue, just eight matches one after another until you face off against Lord Drakkon at the end. Once you take out Lord Drakkon you don’t even get an ending cutscene or follow up for your main character, it just ticks them off to show you’ve won the game with them as your main.

Now, I know what you’re saying – a fighting game doesn’t need exposition or story, its main purpose and draw is in the multiplayer. Just look at Soul Calibur on the Xbox 360 – you could complete the arcade mode within 20 minutes from beginning to end. That’s true, I just would have liked more battles or maybe some 1v1 segments as well as a little story for each of the characters as to why they are fighting each other.

Although, even though the Arcade mode is a bit lacklustre and underwhelming, it does get quite challenging at the seventh match and it took me around 40 minutes to work my way through all eight matches. Thankfully, there’s a key mechanic which makes Power Rangers: Battle for the Grid a surprisingly enjoyable game to play…

The combat is rather satisfying.

The Combat
I personally thought that the combat within Power Rangers: Battle for the Grid was really well done. All of the attacks seem to have weight, every character had their own moves and skills, there’s a decent amount of combos and special attacks to learn, and having the rotation of three characters did offer a nice variety to play with, regardless of my dislike of the mechanic.

Just like with most modern fighting games, the more you hit (and get hit), the more a special meter fills up. This allows you to unleash much more powerful attacks such as the Green Ranger calling his Zord to shoot missiles at his foe. Speaking of which, you can also pick from three ultra attacks, Dino MegaZord, DragonZord or Mega Goldar. These are charged the same was as your special attack and can be unleashed once per match. Unfortunately, it sounds better on paper than it is in reality – it just means that once you summon them, you’ll see their arms, legs, fists, or tails smash the opponent for a few seconds. The enemy also has its own summon which they’ll use against you during the fight.

When I first saw this option, I thought it was going to zoom out and have me fight their chosen special character in a 1v1 massive fight (like on the TV show) but alas, that’s not the case! However, even though this disappointed me, and the locked 3v3 mode isn’t my cup of tea, the actual combat side is solid and the game held up in all modes, including online play and local multiplayer. But, it can’t have a happy ending, can it! There’s a massive issue with Power Rangers: Battle for the Grid, the lack of…

There are alternative skins which can be selected by changing the ‘colour’ of the characters.

Characters
Let’s start with a bit of backstory, Power Rangers: Battle for the Grid was developed by nWay under a partnership with Lionsgate and Hasbro. nWay also developed, and are still actively supporting, Power Rangers: Legacy Wars, a mobile phone game that offers 3v3 standard and 1v1 Zord battles. Looking at screenshots and videos of the said mobile game, I’d be inclined to think that some of the character models within Power Rangers: Battle for the Grid have actually been ripped straight out of the mobile game (as they really do look that good). However, as it’s a mobile game, the controls are limited and there appears to be a lot of microtransactions.

On top of this, you can purchase a season pass for almost as much as the game which will unlock four skins, not four new characters, just four skins to existing characters named above. *Update – you can also play as the default or alternative colour of each character by picking a new colour on the character selection screen. It doesn’t change anything but their skin, but it’s a variation*

However, the mobile game, which admittedly has been going a lot longer, has over 70 playable characters (including a few Street Fighter cross-over ones). It also has eight Zords instead of the three we get in the console game. The question I would love to ask is, where are all the other characters? Why only pick nine, a few of which are minions for Lord Drakkon and the Arcade mode doesn’t even follow a structured narrative which leads up to him properly. The mobile, however, has characters like all the original MMPR team, Rita, Lord Zedd, Alpha 5, Putty, the rangers from other series’ like Turbo, In Space, Lost Galaxy, Time Force, Wild Force etc…

Have these all been omitted from the game in order to sell separately as DLC? I doubt it, but why not include them if they have the license for the characters already within their other game?

Another annoyance I have with the game is its music. Again, referring to the mobile game, I watched a video introducing a new character from Super Mega Force and guess what music it ended the video off with… The MMPR theme is iconic to the franchise. Can that music be found anywhere within the console game? Nope. I’m not sure if it’s using music from later shows, ones I don’t know, but it’s certainly not using music that everyone knows and loves.

I don’t think I can express my disappointment with the game enough – the combat is great, it feels like a solid fighting game, but when it launched with less content than the original Mortal Kombat, it’s unforgivable. If the characters have just been taken from their other game (speculating), I would love it if they started to introduce new characters via an update and give us the chance to fight 1v1 as well as 3v3. Sure, that may change the whole dynamic the developers were trying to achieve with this game, but it not that fun being forced to play with 1/3 of the characters in every match. If it had the roster of 70+ characters then yeah, 3v3 would be great, but it doesn’t.

Visually, the game looks and plays great on the Switch. I’ve played it mostly in handheld mode and it ran without any obvious frame drops or reduction in resolution, it just ran flawlessly. The main issue with the game, in terms of its technical faults, is the loading times. It takes a long time to load the next match when playing on Nintendo’s console – a few fights have caused the fan on my device to blow like crazy as well, so I’m not quite sure what that’s all about unless it’s graphically pushing the system to its limit?

Final Conclusion:
Power Rangers: Battle for the Grid could have been amazing if they had remembered to put in all the content! As a fighting game with only nine characters upon launch, a mechanic where you have to pick 1/3 of the roster for your team per match, a season pass selling four skins for £12.99, and 8x less content than the developers mobile game, it’s unforgivable. The actual fighting, visuals, performance and fun you have whilst playing the game, all help try and redeem it, but it’s not enough to balance out the lack of content you get for your money.

That’s the dilemma, Power Rangers: Battle for the Grid is a fun game to play against friends or random people online, it’s just not an enjoyable single-player game and there isn’t enough variety and choice to keep younger kids entertained. I’m hoping the game gets a few patches to allow 1v1 and bring in some more characters from the 70+ within the mobile game the developers also work on.

**Update: Post-Launch, the developer has added three new characters and a Story Mode as a free update. Click HERE to read my review on that aspect.**

Power Rangers: Battle for the Grid 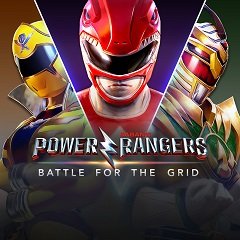