The Room is a series of clever and intuitive puzzle games which originated on mobile devices, the original title was one of the first games I ever bought for my iPad. Since then we’ve seen a number of sequels, ports on PC, and even a Nintendo Switch edition via Team17, there’s a strong following for the unique and immersive experiences these titles provide. So logically, the next step for the developers was Virtual Reality, fully immersing their players within a mysterious and cryptic world known as The Room VR: A Dark Matter.

Both published and developed by Fireproof Games, the masterminds behind all of the ‘The Room’ games, the jump from a fully interactive 3D puzzle game to a fully immersive 360-degree VR title is massive. You’re no longer solving a single puzzle in front of you on your screen, you’re physically placed within a puzzle, a building comprised of mysteries, secrets, and cryptic clues. This week has been a great week for PSVR owners, first, we had Paper Beast, a game that is on my GOTY list, and now we have The Room VR: A Dark Matter – a game that follows suit and is easily one of the best puzzle games on the platform.

The year is 1908, there have been a number of disappearances throughout London, none of which left any traces of clues or evidence. However, one particular case caught your eye, the vanishing of an esteemed Egyptologist who worked at the British Institute of Archaeology. You can’t fathom how someone could have simply disappeared from such a secure facility without anyone seeing him or his kidnappers. What made this case even more strange was that the victim in question had told his colleagues he was on the verge of a great discovery – yet he was much more distracted than he used to be.

As such, you decided to personally look into this case and see if you can find any information on his whereabouts. But, before you head off to the victim’s last known location, you’ve been sent a parcel that your sergeant has locked up within the rather advanced evidence storage facility. After deciphering the first puzzle (of many), you take your new gift and head off, off into the unknown as you chase something which is supernatural, fantastical, and magical – not to mention down-right creepy!

The game spans over five chapters and will challenge you with various puzzles and obstacles for you to overcome. As you follow the clues left behind for you to read, as well as view memories of the past, you’ll soon realise that you’re not in London no more and there’s no turning back now you’ve come this far.

Look through the wall to see the puzzle – in this case, you play the piano to make the ball drop!

Gameplay
The Room VR: A Dark Matter is a truly immersive VR puzzle game. With the use of two Move controllers, you can naturally reach out and grab things, flick switches, push buttons, and slide sliding things. However, it’s not a free-moving VR game, you can only teleport to certain points in the world and you can only use snap turning. As this is a puzzle game and not an action game, I didn’t mind these restrictions as they actually allow the devs to know where you are at all times, ensuring the items of interest and puzzle mechanics are always within reach and not buggy. I saw similar limited movements within other games such as The Door and Unearthing Mars 2.

Seeing as the game introduces supernatural and magical elements into the gameplay, not everything is as it seems. By utilising a special eyepiece (which gets upgraded as you progress through the stages), you can see hidden messages, secret symbols, memories of the past, and you can even see through various materials. For example, in the first stage, you can use your new sight to look into stone slabs so you can see what you’re doing as you move levers and switches. Later this gets more involved and advanced as you see holographic puzzles and as a means to get into ‘Honey I shrunk the Kids’ mode.

Let me explain, there are certain puzzles which you can’t solve as a ‘big boy’. As such, you shrink yourself down and enter key locks or small objects, allowing you to solve the enlarged inner-workings of the puzzle from the inside out. It’s quite a surreal moment, especially when you turn around and see the room you were just in, only it’s now about 100x bigger!

This puzzle has a number of mechanics involved in it…

Difficulty
The game doesn’t like to tell you what to do. Sometimes you’ll find letters lying around which may hint at what you should be looking for, but most of the time it’s up to you to explore and figure out where the puzzles are located and how they work. This was a brilliant idea as there’s nothing worse than having a puzzle game that either gives you the instructions on how to complete a puzzle or blatantly tells you what the answer is without you having to think about it. Instead, you may actually find yourself a little lost at times or unsure of what to do – that’s a good thing, it makes you use your head!

However, should you find yourself really stuck and you’re on the urge of either giving up or resorting to looking for the answer online – don’t. The game gives you up to three hints in regards to any situation. If you just want a clue on what you should be focusing on, pull tab ‘1’ and see what it says. If you’re still stuck, pull tab ‘2’ and get more guidance. Tab ‘3’ essentially tells you the answer in most cases. I admit, I had to use these hints on one of the stages as I was a little confused, but they don’t affect trophies and it means you’re not stuck on a puzzle for hours – allowing you to progress without feeling frustrated. Also, you’ll have all 100% of the trophies once you finish the game – there’s no missables or ones which require extra work.

In terms of the actual puzzles, not the navigation and finding the next one to engage with, I thoroughly enjoyed every single one presented to me. I don’t recall any of them repeating, each one offering a cryptic, physical, logical, or item-based solution. Each stage you travelled to also had it’s own theme and puzzles, further immersing you into the dark and creepy world the devs have created. Speaking of…

Always happy to see us…

The Levels
The Room VR: A Dark Matter started off really strong, but it was disappointing by the end – let me explain. The police station was great, it had a nice logic puzzle and the aesthetics looked great in VR. Then we went to the British Institute of Archaeology and even though it was only a single room, there were plenty of puzzles scattered around and the atmosphere was spot-on. The next two levels were even better, offering more rooms, bigger areas, more detailed environments, and I believed I was actually there. Then we came to the final stage…

Whereas the stages up until that point, not including the station, had been about 30-45 minutes each, the final stage took me less than eight minutes to complete. I’m not sure what happened but the puzzles were much easier and I breezed through them with little to no issues at all. It was a bit upsetting as the game had been brilliant up until that point and I was hoping for a much longer and in-depth final chapter. That being said, the puzzles were fun and one of the final scenes was very beautiful and left me in awe – as Paper Beast did.

One thing that did redeem a bit of my disappointment was the character animations. Throughout the game you can enable your second sight and hold up the notes you find to view past memories – these mini cutscene animations were so realistic. I honestly thought the developers had simply recorded actual people and then put them in the game – rather than CGI characters, that’s how good some of the movements were.

rotate the maze-like platforms then shrink yourself and hop inside…

Technical
Speaking of the visuals and animations, The Room VR: A Dark Matter is one of the clearest games I’ve played in VR this year. I could read every note I found without having to squint or bring the letter right up to my face, I could make out objects in the distance, the assets and textures were of high quality, and the overall experience was polished so much more than some games I’ve played previously. Seeing as this is the first title the developers have made in VR, I honestly can’t wait to see what they come up with next as this is a fantastic first start in terms of performance and visual quality.

In terms of the audio, the game fully utilises the 3D audio within PSVR, allowing you to hear various ambient noises from all around. There is no music within the levels, it’s all about the ambience such as the wind, things creaking, clocks chiming, fires roaring, etc… It makes the game feel much more immersive and real whilst also slightly creeping you out when you begin to hear voices behind you!

Final Conclusion:
The Room VR: A Dark Matter is one of my favourite PSVR puzzle games of all time, offering a bunch of unique and entertaining puzzles within a beautiful and magical world. Although the length of the stages got rather short towards the end, my journey up until that point was a very memorable and enjoyable one, so the final stage didn’t alter my overall opinion, I just wished it had cranked things up and presented us with harder and longer puzzles to solve.

If you’re a fan of puzzle games and own a VR headset – I can’t recommend this game enough – this title is a must-buy, it’s that simple!

The Room VR: A Dark Matter

Hi, I’m sad to hear that. I was playing on the Pro with the Move controllers and didn’t experience any issues. I’m not sure if there have been any updates since I last played it but I completed the game the day before I wrote this review and it never crashed on myself form an external HDD.

I never tried with the DS4 but I’ll do that with future reviews, see how the game plays with both methods seeing as Move controllers can sometimes be a bit tricky to get hold of. 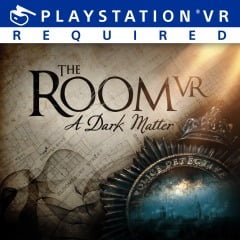