Studio Koba, a small Spanish-based developer, has created the perfect nostalgia-filled ‘80s throwback with Narita Boy. If The Last Starfighter and Tron had a computer game love child, this would be it. Narita Boy impressively merges both retro and futuristic themes and ideology to create a 2D pixelated action-platformer that is both distinct and original yet feels oddly familiar.

The story of Narita Boy is set in the ‘80s and takes place within a video game, aptly named Narita Boy, which is the flagship title for the newly created video game console Narita One. The game becomes a best-seller and is critically acclaimed, however, within its binary code the digital realm begins to connect with reality. In doing so, the evil program ‘Him’ has returned and managed to connect with reality to delete the Creator of the game’s memory and unleash his Stallions on the Digital Kingdom. In doing so, the Supervisor Program, Motherboard and her agents have activated the Narita Boy protocol, and only he and his trusty Techno Sword can save them and return the memories to The Creator.

Throughout this action-platformer, which is very reminiscent of games within the Metroidvania genre and inspired by the likes of Castlevania and Another World, you will come across many imaginative NPC characters within the Digital Kingdom. Through these you learn more about the lore of the digital dimension and that in order to stop ‘Him’ you will have to traverse through the three Houses of the Trichroma and follow the code lines of the Creator to unlock his memories. There is much more dialogue within the game than I expected there to be, at first it can seem a little overwhelming as it is quite techno jargon-heavy, however, it does an excellent job of creating a living world within the computer game itself.

As you progress and unlock the memories of The Creator, you flashback to his childhood and the adverse effects of what happened to him which led to him creating Narita Boy in his adulthood. I was surprised at just how deep and moving the story was and how cleverly it ties together the digital and physical settings of the game’s world.

The Metroidvania / action-platformer genre has had a major revival in the indie scene over the last few years with titles like Hollow Knight and Blasphemous, as well as the Ori and Guacamelee series of games. To stand out in this crowd you need to have something about you and Narita Boy has this in abundance with its stunning Neo-retro pixelated visual aesthetic that is a constant treat for your eyes. The game’s presentation has a plethora of 80’s-themed stylistic homages, therefore expect a lot of neon, but what really compliments the visual design is the CRT-style display overlay that adds even more authenticity that you’re playing a retro computer game.

In motion, Narita Boy looks even slicker with beautifully fluid attack animations including whist using the Techno Sword you are treated with a stream of red, blue and yellow after-effects that matches the three beams of code from the Houses of the Trichroma.

There is an array of different environments throughout the Digital Kingdom that are in stark contrast to one another and include a desert kingdom, with its four-legged computer rigs that act as a digital horse; the deeply dire coastal town with its constant downpouring of rain; and late-game you visit the Capital, an impressive high-rise city that is populated by numerous NPC’s and feels completely alive. I can’t stress enough just how truly gorgeous Narita Boy is, but due to the busy nature of everything that is going on on-screen, it does create some minor difficulties seeing exactly where sections you can climb are within the scenery and obstacles you have to avoid, especially those bloody puddles, which embarrassingly I fell into too many times for my liking.

Complimenting the visual aesthetic of Narita Boy is the equally impressive ‘80s synth-wave soundtrack. The soundtrack ramps up perfectly in battles, in particular, one has a banging rock tune that is supported on-screen with a band fully rocking out in the background. Even during quiet times, such as flashback scenes, the music shifts to a pretty music box-like tune to suitably match the emotive tone of the scenes.

Narita Boy’s slick and often frantic combat can’t quite match the awe of the game’s visuals. The combat is largely of the hack n’ slash nature, with your mighty Techno Sword as your main weapon, but you also unlock a variety of different abilities as you progress through the game. One of the first is your trusty shotgun. This can be used as a single shot function to stun enemies, or if you have the full clip of ammo you can unleash a powerful and usually instant-kill shot on most enemies. Your ammo is reloaded through kills with your sword, so you always have to juggle your attack style to be able to use the powerful shotgun blast.

Other abilities include a simple dodge to quickly dart out of the way of incoming attacks; a shoulder bash for attacking shielded enemies; an uppercut attack that hits hard on flying enemies; and one of the most tricky attacks that you get in the late game is a piercing stab that not only hits a number of enemies at a time but also removes armour from those that have it. It really took me a while to master this move effectively but it was unlocked so late into the game that I didn’t find much use for it anyway.

Each House of the Trichroma also has a hero summon that you unlock who can assist you in your battles. These are colour-coded power-ups that give you a significant power boost against enemies of the matching colour, which is represented with a flame above their heads. To unleash these summons you have a meter that fills on defeating enemies. Like your shotgun ammo, this bar will deplete when using a summon but will also drain when you use your heal ability. You, therefore, have to choose wisely in battles whether to heal yourself or use a special attack, as especially in the late game, battle sequences throw more enemies at you and become a much more frantic affair.

I found Narita Boy to have just the right level of challenge and I was only frustrated during one combat sequence which took place on top of a moving train. This was due to an enemy appearing that was heavily armoured with a huge shield that if you tried to jump over him, he would block you and then hit you with his giant sword. This enemy appeared after quite a few sequences with enemies already, and so you have had to manage your health well up to this point. The armoured enemy is also joined by a couple of other enemies, either side of him, which shoots bolts at you and adds even more attacks to have to avoid.

I had fought this enemy previously, but it was a while back in the campaign, so I couldn’t for the life of me remember the technique for getting over him. It was actually quite easy as when you get close to him he will unleash a strike of his sword towards the ground, which you can dodge back from and then while he is crouched over you jump over him to get one or two hits to his backside. In the heat of the battle, I often lost my health and had to start back at the start of the battle sequence and get through all the previous enemies again. This was the only sequence throughout the game that I had to repeat more than twice and found the rest of the battle sequences really well-balanced.

The variety of enemies and bosses throughout the campaign of Narita Boy is truly impressive. You will come across the simplest of enemies in the form of zombies to giant robots and much more speedy witches that can teleport across the screen. Bosses, as you would expect, become much more challenging as the game progresses and have an arsenal of different attack patterns or only certain areas where they can be hit. Thankfully, I never found any of the bosses to be as intense and fast as I found in a game like Hollow Knight, in which I really struggled at times to learn the ever-changing attack patterns.

The only boss I struggled with was called ‘The Glove’ where at one point you have to either jump over, crouch or dodge-jump through some electric balls that are fired at you. This section was only difficult due to the rather horrid jump mechanic, which I will come to shortly. One of the coolest bosses I fought was against a giant koi and this was because it played like no other boss in the game as you had to fight him while riding a floppy-disk surfboard!

Outside of combat, you spend the rest of your time following objectives to collect floppy disks or hunt for three coloured symbols to be able to input them in a teleporter to explore new areas. This is where Narita Boy is similar to other Metroidvania games as there is some back and forth platforming sections and using new abilities, like the ground smash, to open up areas to proceed. There is, however, no map to help guide where you need to go for your objectives, but I never found this as too much of an issue as each area isn’t that overly large to explore.

Unfortunately, traversing the environments is impeded by, as previously mentioned, the rather horrid jump mechanic. Jumping does remind me of old-school 2D platformers where it is floaty and feels like you slide as you land. Trying to land on a small platform often results in either overshooting the landing or just skating off the platform you have landed on. I guess it is authentic to the feel of retro platformers, but when platforming is such a large aspect of it the game, it’s a shame that this simple mechanic prevented me from enjoying the game to its full potential.

This negative point aside, a huge highlight of Narita Boy comes in the form of transitional sections between areas throughout the campaign, where the traversal mechanic completely changes. This includes riding on a stag for a side-scrolling runner section where you have to jump over obstacles or dash through enemies; to as previously mentioned, riding the waves on a floppy disk surfboard; and lastly the most kickass section – where you transform into a giant robot to plough through enemies. These sections not only add further variety to the game but are extremely satisfying to play.

Final Conclusion:
Narita Boy has instant appeal with its gorgeous pixelated visuals and absolutely ‘80s-esque banging soundtrack. The ‘80s nostalgia, thankfully, isn’t all this game has to offer as the narrative is surprisingly emotive, and the lore of the Digital Kingdom is interesting, if not a little techno jargon-heavy. Swinging the Techno Sword and cutting through enemies is immensely satisfying and the challenge is spot on. Jumping mechanic aside, this is easily one of the most accomplished 2D pixelated action-platformers that I’ve played in recent years and I would highly recommend that you load up your Narita One console and become NARITA BOY! 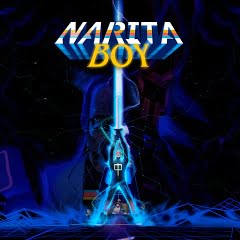